In August 2016, members of the George Washington University (GW) Hospital anesthesia team — including Samantha Brackett, who was just one month into her first year of residency — were waiting on standby in the interventional radiology (IR) suite. Their patient had presented to the Emergency Department with severe abdominal pain, but was stable enough to move to the IR suite for a procedure to embolize a ruptured vessel, the source of the problem.

Suddenly, recalls Brackett, “the patient experienced an acute intra-abdominal hemorrhage from the rupture of this vessel, and became very unstable. We were immediately able to secure the airway as well as manage the massive blood loss and critical situation that was unfolding. Immediately after intubating, I began to notice certain changes that are characteristic of MH.” 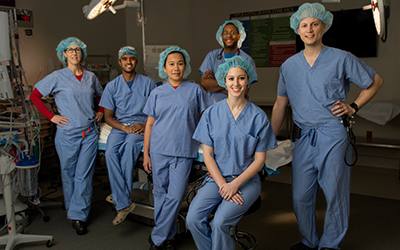 Brackett explains in lay terms that MH, or malignant hyperthermia, is a rare genetic disorder that causes a defect in a type of skeletal muscle receptor. When certain anesthetic agents, such as inhaled anesthetics and succinylcholine, a neuromuscular blocking drug, interact with the receptor, a biochemical chain reaction occurs.

“[The body] generates excessive heat that actually breaks down the muscle cells,” Brackett explains. “You can have pretty catastrophic damage. It’s key that you treat it early, and even minutes in treatment delay will increase morbidity and mortality.”

With the clock ticking, Brackett noted key signs of the disorder — increased exhaled carbon dioxide, increased heart rate and temperature, and muscle rigidity — and ran through the checklist of possible diagnoses in her head. The habit was one she had performed during an MH simulation just a few days earlier in the Clinical Learning And Simulation Skills (CLASS) Center at the GW School of Medicine and Health Sciences (SMHS) — a striking coincidence given that most anesthesiologists never see MH in their entire career, let alone within the first weeks of their residency.

“In all of the years I’ve been practicing, getting close to 20 years, I’ve never had a patient with MH, ever — that’s how rare it is,” says Marian Sherman, M.D. ’99, assistant professor of anesthesiology and critical care medicine at SMHS. “But you talk about it every year in training, you talk about it on every standardized exam you ever take as an anesthesiologist. It’s definitely one of those clinical scenarios that’s high stakes, and you’d better know what to do with it because it’s our specialty.”

It’s for those reasons that anesthesiologists regularly train for cases like MH. For residents, however, simulating such a critical disorder not only incorporates minor simulation exercises, such as inserting an IV or arterial line, but also team training and communication skills.

“When you’re doing high-stakes drills, like an MH drill, you don’t want one person doing everything,” Sherman says. “You want one person to lead the drill, you want to recognize people’s skills and abilities and assign tasks to each person, and create conversation between the participants so that you can intervene most comprehensively in these crises. As always, the earliest determination of what’s wrong relates to better patient outcome.”

It’s that type of training in which the SMHS CLASS Center excels. “You learn better when you do it yourself,” says Claudia Ranniger, M.D., Ph.D., director of the simulation center and assistant professor of emergency medicine at SMHS, “and we don’t let you leave having failed.”

What’s key, both Ranniger and Sherman say, is that the CLASS Center is a safe learning environment. Depending on the scenario, both residents and medical students, as well as nurses from GW Hospital, can practice their skills — whether with manikin Victoria in the labor and delivery suite; with another manikin, Hal, in one of two operating rooms; or in the high-fidelity rooms and the procedural skills lab — without worrying about negatively affecting patient outcomes.

“It’s great to have a responsibility that you usually don’t get to practice and to test yourself in a safe environment,” Ranniger says.

Rooms are set up as realistically as possible, with the kind of equipment students and residents would see in GW Hospital. Depending on the scenario, learners may know various details and operate accordingly; in other cases, students will go in without any information.

“The subject matter almost gives away what’s important in the exercise, which is identifying variables and coming up with a broad differential diagnosis, and then making smart, informed interventions,” Sherman says. “We might give them a little bit of information, like ‘the patient you’re taking care of is a 40-year-old person who has a history of asthma and had a knee scope under epidural anesthesia in the past. You’re taking care of this patient now. The patient’s in the OR, ready for induction of anesthesia.’ ”

In Brackett’s simulation, there was scant contextual information. “We knew that the scenario would involve a type of anesthetic crisis; we just didn’t know what type of emergency we were going to deal with,” she recalls. “Our scenario involved a young, healthy patient having a fairly low-risk surgical procedure. The case began at the time of induction of general anesthesia in the operating room.”

It was then that she ran through possibilities in her head, an ability that was strengthened with practice. “What, in particular, the anesthesiologists do when they ‘sim’ with their residents, is to say ‘come up with a differential diagnosis in your head for all the things it could be, no matter how improbable,’ ” Ranniger explains. “Unless you do that, you won’t think of it when it really happens. It keeps you engaged in care of the patient and thinking ahead, and that’s really what’s so important to prevent adverse outcomes: to see it coming, not wait until it happens and recognize it.”

With her simulation team, Brackett considered potential diagnoses before settling on the correct one and shifting to the debriefing session, arguably the most important part of the simulation exercise. Because the CLASS Center simulation rooms are equipped with audio and video recording, debriefing participants can review their performance, learn the consequences of misdiagnosis, and reflect on their diagnostic process.

“There’s no better way to learn than to have followed your line of thinking and get the wrong clinical consequence, because every single simulation session we do is followed immediately by a debriefing session,” Sherman says. “Some people have an image of what they look like or what they’re doing in a scenario, but if they’re anxious and they’re hanging back, you can see that when you do the video recap. A simple, gentle suggestion like ‘move in next time’ [works] because when you’re in closer to the patient, the whole team knows you’re there, your hands are ready to work.”

That kind of encouragement directly feeds into students’ and residents’ performance when in a real-world situation. In Brackett’s case, as the team tackled their patient’s care in the IR suite, she mentally ran through the differential diagnoses, “picking it up, I think immediately, because I had in the back of my head that I had just experienced it and I knew it was such a potentially devastating diagnosis.”

Brackett relayed her suspected diagnosis to the other anesthesiologists, an act of considerable courage. “For a first-year resident to say ‘I think this patient’s resuscitation might be complicated by a case of MH’ [was brave] — she said it a couple of times, and I really applaud her for having the confidence to say again that something isn’t right here,” Sherman notes.

Brackett, however, credits the diagnosis to her team. “I had such a strong team around me,” she says. “That definitely put me at ease, and we were able to effectively communicate and successfully treat the patient.”